A comparative study of Moroccan and Quebecois contexts

This research is part of a global context where identity tensions are strong and where certain debates related to diversity are often crystallized around exclusive categories such as them/us. What group(s) do children of mixed couples identify with? One group? Several? Do they define themselves as mixed? Are they creating new identifications? What images do we send back to them? Have they experienced racism or discrimination? Do the reactions of others have an impact on their identifications?

This comparative research project is the result of a long and fruitful transnational collaboration between two Quebec anthropologists, one working in Morocco (Catherine Therrien) and the other in Quebec, in Montreal (Josiane Le Gall). Our paths crossed because we were fortunate, albeit a few years apart, to be both supervised by the same thesis director Deirdre Meintel in the anthropology department of the University of Montreal. First of all, we each carried out a study on mixed couples, Josiane and Deirdre Meintel in Quebec and Catherine in the Moroccan context. Together, we subsequently edited special issues of scientific journals and organized international conferences. Reading and discussing with each other the books in which we had published the results of our research, we were fascinated to discovered that, despite the different contexts, several results were similar. We therefore set ourselves the challenge of comparing our results by co-authoring several scientific publications. It strengthened our bond and our desire to work together. This comparative project on the children of mixed couples is therefore the continuation of this wonderful collaboration.

This research aims to describe and understand the process of identity construction of descendants of mixed couples in very different national contexts (Morocco and Quebec). Using a qualitative and comparative approach, the research aims to document the main choices of children of mixed couples in relation to identity markers transmitted or not by their parents. It also aims to examine their sense of belonging, and to identify the various elements that have contributed to the process of constructing the identity of these descendants of mixed couples.

Methdology of the comparative project

Since 2019, two research fields have been carried out in parallel, one in Morocco and one in Quebec. The same research methodology is applied to both studies: semi-structured individual interviews carried out with men and women descendants of mixed couples who have been mainly socialized in the contexts of the study as well as cross-narratives with members of the family (grandparents/parents/siblings) of some of the participants. We use the same interview guide articulated around parental identity projects and choices made by young people, family dynamics surrounding the socialization process, the identification process, transnational practices and relationships with members of the family/kinship as well as the relationship to Moroccan/Quebecois society.

On both sides of the Atlantic Ocean, the fallout will affect both the scientific community and the wider public (civil society, public institutions, schools, decision-makers, the general public). With other colleagues interested in similar themes (Karine Geoffrion and Francesco Cerchiaro), we are currently working on a collective book on mixed families in a transnational world, and a special double issue of a scholarly journal on mixed Muslim/non-Muslim families. These various publications will see the light of day sometime in 2021.

* The term child refers here to the position of the individual in the mixed family. It is a definition in terms of generation rather than of age.

This research project is funded by 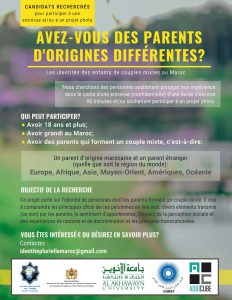